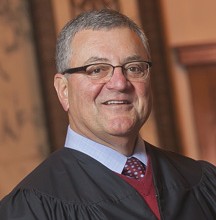 U.S. District Court Judge Joel Pisano ’71 presides over high-stakes cases in Trenton, N.J., involving virtually every aspect of the law. President Bill Clinton nominated Pisano as a federal judge in September 1999. The nomination reflected the experience and wisdom Pisano had acquired through his years in the public defender’s office, in private practice, and as a U.S. magistrate judge. In February 2000, Pisano was confirmed and received his commission. Read the full story……..